Military-Like Boarding
School for Boys
Who Are Struggling

Military-Like Boarding
School for Boys
Who Are Struggling

Once a typical military school, Gateway is now so much more! It offers a life-changing boarding school for boys that builds discipline, respect and leadership in troubled boys.

Boys who have gotten off track in life need discipline and they need order. They need to learn a trade and begin to show respect for authority and for their loved ones. And most of all, they need God in their lives. From its military school roots, Gateway remains regimented, but it now blends a character-enriching and vocational program into a military-like decorum. The boarding school has eliminated the meaningless drills and drill sergeants of typical military schools and boot camps.

“Gateway is the only remaining military school in the nation that works with boys who have gotten in trouble with the law or expelled from public or private school.”  — MilitarySchoolUSA.com

OUR PASSION TO HELP BOYS

The primary goal of Gateway is to help boys age 11-17 turn around from bad behavior and attitudes and grow in faith. Students are encouraged and mentored to live out their faith in everything that they do and say.

Gateway turns around boys from the inside out.  If you could see the before and after pictures of the boys who come to Gateway, you would see boys who were once destined to be school dropouts or in trouble with the law who have blossomed into confident, happy, and caring young men. You would see once selfish boys with a chip on their shoulders who are now ready to give someone in need the shirt off their back. You would see once aimless boys now with self-respect, respect for others, and direction and purpose for their life. 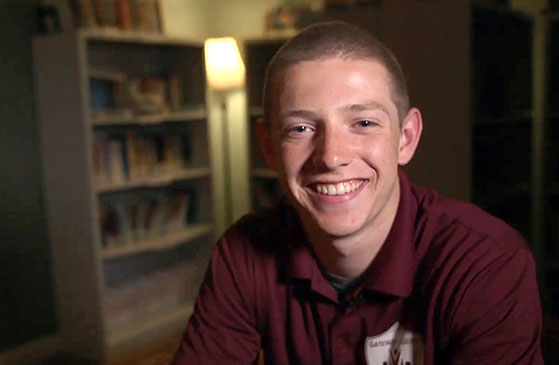 I prayed by my bunk for the first time. I regained the relationship I once had with my parents and developed respect for authority, a work ethic, and learned how to love myself and others. Now I strive to make God and my family proud of me.

We tried everything we could think of for our troubled son — tough love, counseling, traditional church activities, and homeschooling. But all were to no avail. The format of Gateway was tough at first, but it taught John self-control, physical work and teamwork, leadership skills and integrity. He received love, discipline, forgiveness, and persistent mentoring. Gateway Boarding School is a God-send for our broken family…restoring our relationship with our son. It is a place of hope, a place of love, and a place of renewal.

A year ago we were hurting and at a loss. This year we are missing our boy but knowing that he is in loving and capable hands. We are so proud of him.

Gateway Boarding School was the best decision we have made in our entire life. Our son’s life was saved from destruction. The education at Gateway was the finest he could have received anywhere. He became a self-disciplined student with motivated study habits and finished with a 3.9 GPA. He now has the desire and compassion to serve in his community and church, as well as tutoring and mentoring younger kids

God used Gateway in a mighty way in my life. What this program did for me is something that I cannot put into simple words, but I can say that I met Jesus Christ at Gateway.